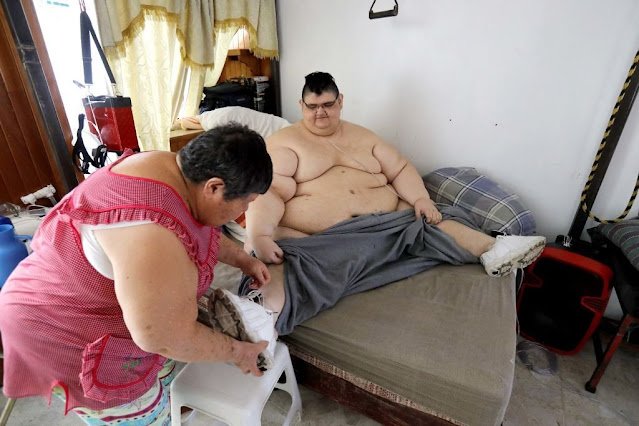 The story of the heaviest humans on Earth is by turns turbulent, tragic and even uplifting. Record holders face a constant struggle, not only with their extreme size and fluctuating waistlines, but also the life-threatening health issues that accompany them.

The heaviest human category is not one that’s challenged very often. Few individuals wish to publicize their extreme obesity, although occasionally a new story breaks when someone seeks help for what is a very serious medical condition. This is the case with the most recent man to be verified as the world’s heaviest human: Juan Pedro Franco Salas of the central Mexican city of Aguascalientes. In Nov 2016, Juan Pedro made headlines around the world when he was hospitalized for life-saving treatment. Initially reported to weigh 1,105 lb (501 kg; 79 st), he actually tipped the scale at 594.8 kg (1,311 lb 4.9 oz; 93 st 9 lb).Prior to Juan Pedro, the heaviest man was fellow Mexican Manuel “Meme” Uribe Garza of Monterrey, who reached a peak weight of 560 kg (1,235 lb; 88 st) – heavier than six average men – in Jan 2006. He made a televised plea for help and slimmed down to 840 lb (381 kg; 60 st) with the guidance of obesity experts. Manuel was hospitalized in May 2014 suffering from cardiac arrhythmia (irregular heartbeat) and liver failure, and passed away three weeks later at the age of 48. Other heaviest men of recent times include Michael Hebranko (USA, 1953–2013), who suffered from morbid obesity his entire life and whose weight peaked at 1,100 lb (499 kg; 78 st) in 1999. The wall of Michael’s home had to be removed in order to get him to hospital and a whale sling used to manoeuvre him into bed. T J Albert Jackson (USA, 1941–88), meanwhile, peaked at 890 lb (404 kg; 63 st 9 lb). “Fat Albert”, as he was known, had a chest measurement of 305 cm (120 in), a waist of 294 cm (116 in) and a 75-cm (29-in) neck. The heaviest man ever was Jon Brower Minnoch (USA), who had suffered from obesity since childhood. In Sep 1976, he measured 185 cm (6 ft 1 in) tall and weighed 442 kg (974 lb; 69 st 9 lb). But just two years later, in Mar 1978, Jon was admitted to University Hospital, Seattle, USA, where consultant endocrinologist Dr Robert Schwartz calculated that he must have weighed in excess of 1,400 lb (635 kg; 100 st). A great deal of this was due to water accumulation – a result of his congestive heart failure. In order to get Jon to hospital, a dozen firemen and an improvised stretcher were required to move him from his home to a ferry boat. When he arrived at University Hospital, saturated with fluid and suffering from heart an respiratory failure, Jon was put in two beds lashed together. It took 13 people to roll him over.

Pauline Potter (USA) weighed 293.6 kg (647 lb; 46 st) when measured in Sacramento, California, USA, in Jul 2012. She attributes her weight problems to her childhood, when she regularly had to go without food. Following gastric bypass surgery, Pauline shed almost 150 lb (68 kg; 10 st), but continues to battle with her weight.

Heaviest woman to give birth

According to the World Health Organization, 63.3% of the female population of Nauru are classed as clinically obese, as of 2016. The next highest nation on the list is the Cook Islands on 59.2%, with Palau third on 58.8%. The Marshall Islands and Tuvalu make up the top five, with 57.3% and 56.2% respectively.

Weighing in at 594.8 kg (1,311 lb 4.9 oz; 93 st 9 lb) in Guadalajara, Jalisco, Mexico, on 18 Dec 2016, Juan Pedro is the heaviest living man. He had suffered from morbid obesity since childhood, his condition exacerbated by an injury he sustained aged 17. In Nov 2016, the 32-year-old left his bedroom for the first time in seven years to undergo life-saving treatment in hospital. He was diagnosed with type-2 diabetes, thyroid dysfunction, hypertension and liquid in his lungs. By May 2017, Juan Pedro had lost 170 kg (374 lb; 26 st 10 lb) – roughly the weight of two kangaroos – and was able to have gastric bypass surgery. It was hoped that this procedure would help him to cut his bodyweight in half.

Rosalie Bradford (USA) is claimed to have reached a peak weight of 1,200 lb (544 kg; 85 st) in Jan 1987. In Aug that year, she was rushed to hospital having developed congestive heart failure. Through a combination of carefully controlled dieting and exercise – including clapping her hands – Rosalie was able to bring her weight down to 283 lb (128 kg; 20 st) by Feb 1994. She went back to higher education and toured the USA, making motivational speeches at weight-loss seminars. Despite her success in controlling her size, however, it continued to be a problem throughout Rosalie’s life. She finally passed away on 29 Nov 2006 at the age of 63, owing to weight related complications. Heaviest sportswoman Sumo wrestler Sharran Alexander (UK) weighed 448 lb (203.2 kg; 32 st) on 15 Dec 2011. She took up the sport in her early 40s, participating in the Sumo World Championships having won a 2006 reality TV show. Sharran went on to compete in competitions around the world, winning four gold medals and attaining second Kyū grade.

This information is taken from :- Guinness World Records 2019