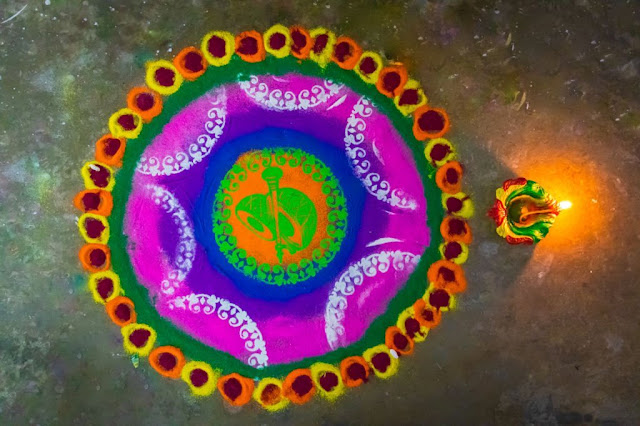 Rangoli is a popular Indian style of artwork that is colourful and depicts the Indian culture and their belief system. The word Rangoli originated from the mixture of two words rang and awali. Rang in Hindi means color and awali means row of colors. So as the name suggests Rangoli is a vibrant pattern of colors that are arranged to create wondrous designs.

According to mythology, Rangoli’s are said to be first created by lord brahma who infused life into the painting of a child. This story tries to explain how rangolis are vibrant and colourful as if they have a life of their own. They are not exactly like a painting but a different art form in themselves which use rice and other unsual ingredients to create a three-dimensional array of patterns.

The most popular kinds of Rangolis are that of geometric designs and figures of god and animals. Now rangolis have expanded to other designs which are complicated in structure. This has been made easy by various craft tools that are available to ensure that your effort is minimized. A good rangoli challenges the creativity and the enthusiasm of the person making it. He or she is not limited by a brush and a canvas, you can use almost any plain surface, big or small and any ingredient that you wish to bring your design to life.

The creation of a rangoli is not limited to festivals only. Usually, these are known to be drawn during Diwali as a mark of hospitality for the guests who arrive as well as Goddess Lakshmi. In recent times this has become a popular trend that can be followed any time of the year. Rangoli is another way of expressing yourself and spreading warmth and joy in return for doing so.